Ending Violence Against Women > The Orange Campaign > What are your thoughts on Elder Abuse?

“In 2020, the world experienced the single largest increase in global hunger ever recorded, a trend that has only continued this year. This predictable and multi-year funding to Canadian Foodgrains... Read more

Good news! Canada is supporting the resilience of small-scale farmers and the health of rural communities through its highest-ever funding commitment to the UN International Fund for Agricultural... Read more

COVID-19 as a Springboard for Education Reforms in SSA 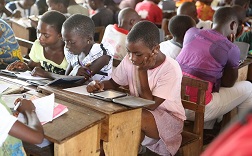 The COVID-19 pandemic has had a global impact on education. The regions most affected are those with a less robust education system.  This is an opportunity for governments in sub-Saharan... Read more

RT @UNGEI: Get to know Transform Education, a coalition of young feminist activists hosted by UNGEI. Join the community and f… https://t.co/7v9pJ9iJl9 16 hours 12 min ago

RT @WaiteRobyn: For each month of delay in fully funding #ACTA, the global economy could lose ~ 4 times the 12 month… https://t.co/VWSHCg2Kzv 1 day 22 hours ago